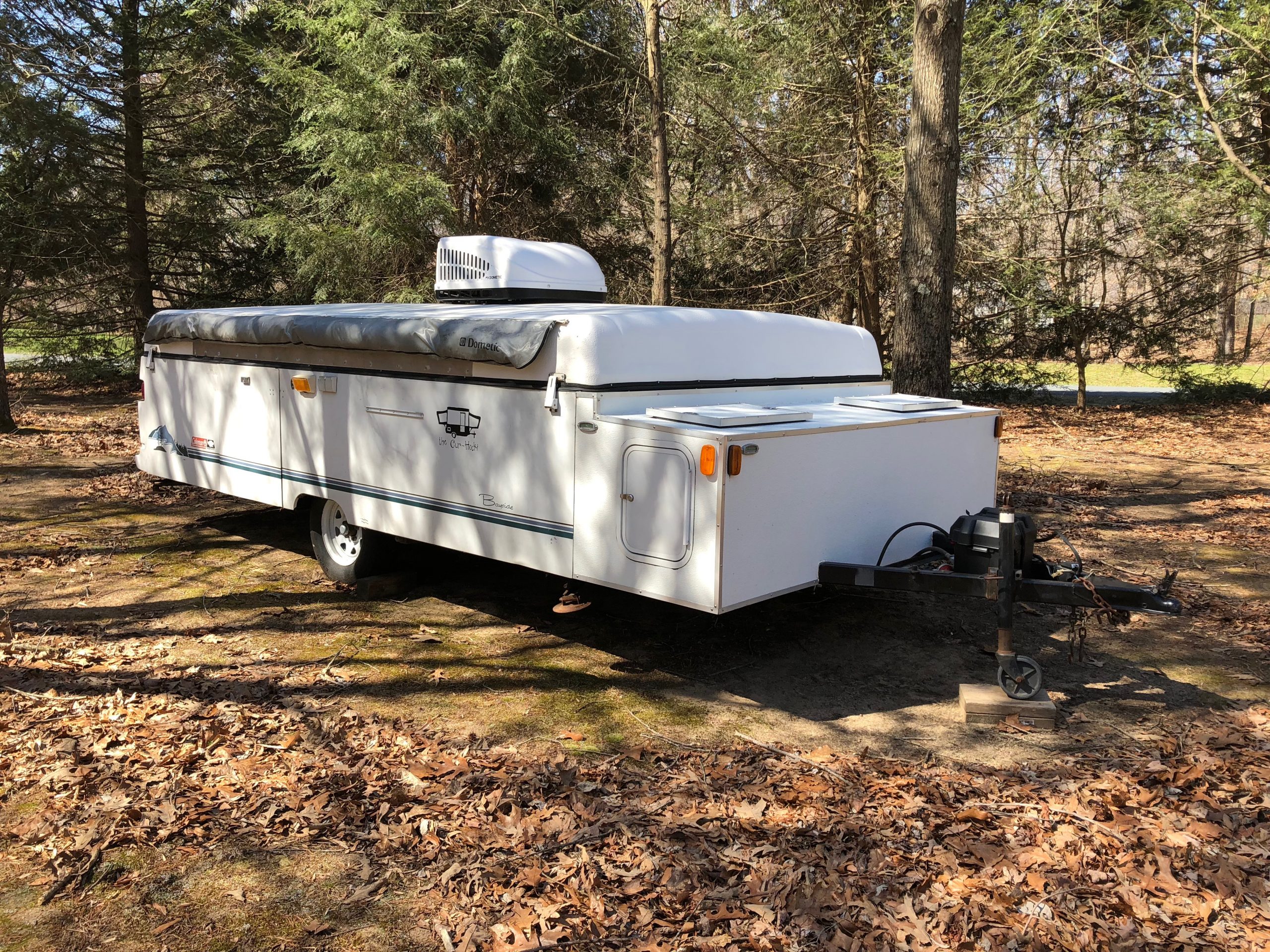 AC units for summer camping are a MUST!!! We knew this when we started the pop up remodel but what we didn’t know was how much work it was going to be to install said AC unit. From building scaffolding, to adding extra roof support, to cutting the hole, to lifting the unit it was an adventure and one that we learned a lot from.

One of our first projects was fixing the cracks in the ABS roof, from that project we learned that the roof was very warped and probably couldn’t hold too much weight. So the first thing that had to be done to install the ac unit was to sure up the roof so that it could support the 72 lbs ac unit.

In the beginning we were planning on saving money and just creating our own support bars, but after further investigation it was determined that we should just stick to what others had done in the past to save time and ensure that it was done correctly. We ended up buying 3 support bars from Coleman Pop Up Parts. From what we read we only need 2 bars but the roof was sagging really really bad and we were worried that the distance between 2 bars would still not be strong enough to hold the unit.

Because the roof was sagging so much we need to lift it and reshape it before we could even install the bars. So Jamie and my dad created a scaffolding system that went inside the camper. From there the camper was lowered to take the strain off the lift cables and allow the roof to sit on top of the scaffolding.

After that whole process they had to add sheet metal to the sides of the lid because they were not strong enough and most likely going to crack again.

It was amazing to see how much sag the roof actually had. It was surprising that the whole roof hadn’t fallen in on us during one of our camping trips.

Believe it or not all of this was done during one weekend. The following weekend…

They cut the hole for the new ac unit based on the install sheet and used a pully system to lift and lower the unit into the hole, but not before they had fun climbing in and out of the hole. Lol

Actually attaching the unit to the camper was very easy and the directions were spot on. Jamie and my dad did have to figure out how to run the electricity to the unit. They decided to use an old electrical cord and run it along one of the support bars and down the lift mechanism. To keep the cord in place they used cable clamps from Lowes.

Even though we did buy a bigger unit than what was suggested for our camper we still had some problems when we used the ac during the really hot summer months.  During the hot summer days if the unit was on and running it would often overheat and pop the breaker. It would take a little while for it to cool down so that you could turn it back on, then it would just do it again.  This really wasn’t something that we could fix so we worked around it by planning to be outside at the pool or beach during those really hot hours so that we could turn it off. If we were back at camp and needed a cool spot we would spend some time in my parents motor coach.

Installing the AC unit did involve a lot of prep work but in the end it makes camping during those hot summer months bearable.  We would definitely do it again.

You May Enjoy These Related Articles

Did you enjoy this article? Want to hear more? Stay in touch! Sign up below to receive weekly tips and inspiration for your homestead. Most Pop Up Campers are older and need a few upgrades. Ours was no exception! After fixing the heat/water heater and rebuilding the front storage…

Covering up the camper isn’t fun for us or the kids. We love camping so much that knowing we can’t camp for a couple of… From the beginning, the front storage box on our Coleman Pop Up was a problem. The lid was breaking and wouldn’t seal correctly. The floor… I don’t know about you but I love seeing what others have done to the inside of their campers. It always gives me ideas as…

This ABS Roof Repair was performed on our 1998 Coleman Fleetwood Bayside.  We tried multiple repairs in various areas that never lasted.  The final straw…

Check out Our Camping Favorites